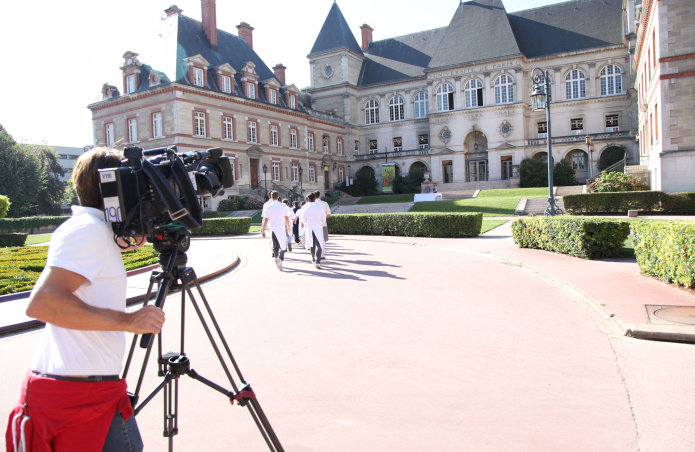 The film and audiovisual sector produces 1.7 million tons of CO2 every year. More and more professionals in Paris region are implementing solutions to reduce their environmental impact. The Ecoprod association, of which Film Paris Region is a founding member, has been working for ten years to support them. The Cité Internationale Universitaire de Paris (CIUP) has become the first film location to join the association and is committed to facilitating the adoption of sustainable creative methods and promoting good practices among productions.

Thanks to the diversity of its settings, the Cité internationale has hosted films as different as Aline, de Gaulle, Neuilly sa mère sa mère, and cult films such as The Lover or Indochine, the film that won 6 Césars, including the one for the best set design.

With a rich architectural heritage typical of the 20th century, the CIUP has 43 houses of various architectural styles and large green spaces. The park and the houses, which were built as early as 1925, offer an incredible diversity of film locations. Some of the buildings express the distinctive features of the countries that helped build them, while others are the work of renowned architects. The interior designs are multiple: art deco wooded living rooms, majestic halls, corridors, staircases and offices offer a unique setting. 6 houses and part of the park are listed or classified as Historical Monuments.

As a dynamic film location, the CIUP has implemented concrete measures to reduce its carbon footprint when hosting productions on its site:

P17 outlets (32A and 63A) are being deployed on the campus near the filming locations in order to reduce the need for generators, both for outdoor filming and for refrigerated trucks for the canteens.

A photo library has been created to reduce travel and location scouting on site.
The Cité internationale has set itself the long-term objective of offering accommodation to non-local members of film crews who can stay on site during filming, as long as rooms are available.

Selective sorting: either by collecting pre-sorted waste from the service provider, or by using the new selective sorting containers in the park.
Food waste: productions systematically adapt the quantity of meals to the exact number of people on site.
Document dematerialization: elimination of the use of paper.

Find the CIUP in our location database: